GujaratRojgar.Xyz 05:35
The IPL Governing Council on Sunday announced the much-awaited schedule for Dream11 Indian Premier League 2020 to be held in UAE. The season will kickstart on 19 September in Abu Dhabi with a blockbuster clash between defending champions Mumbai Indians and Chennai Super Kings, announced BCCI Secretary Jay Shah.

Due to Corona, the IPL will be played in UAE from September 19 to November 10 Approval of Unlimited Corona Substitutes in Tournaments with Bio Secure Environment The evening match will start half an hour earlier i.e. 7:30 and the afternoon match will start at 3:30.

The Board of Control for Cricket in India (BCCI) has announced the schedule of the Indian Premier League (IPL). Due to Corona the tournament will start on September 19 without spectators. The first match will be between defending champions Mumbai Indians and Chennai Super Kings. According to the schedule, 24 matches will be played in Dubai, 20 in Abu Dhabi and 12 in Sharjah. The schedule of 56 matches of the league has been announced so far. The venue and date of the playoffs will be announced by the board later.
The final will be played on Tuesday, November 10. For the first time in the history of the tournament, the final will be played on a weekend instead of Sunday.
The tournament will feature 10 days double header i.e. 2-2 matches in one day. The evening match will start at 7:30 pm, half an hour earlier than the old schedule. When the afternoon match will be played at 3:30 p.m.

Each team will have only 24 players

After the tournament opener on Saturday, Dubai will host its first game on Sunday (20 September) when Delhi Capitals take on Kings XI Punjab followed by the third match on Monday (21 September) between Sunrisers Hyderabad and Royal Challengers Bangalore.
The IPL action will then shift to Sharjah on Tuesday, 22nd September where Rajasthan Royals will host Chennai Super Kings.
Moved out of India due to a surge in COVID-19 cases, the upcoming edition of the world's biggest T20 league will be held in the three venues of Dubai, Abu Dhabi and Sharjah in the UAE.
Here's the complete schedule of the tournament: 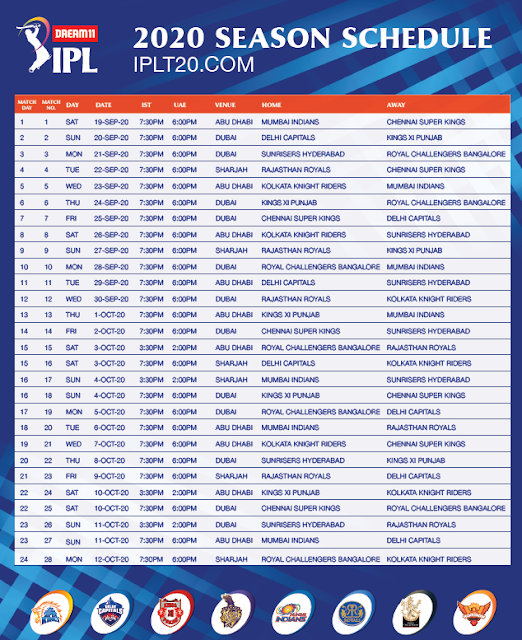 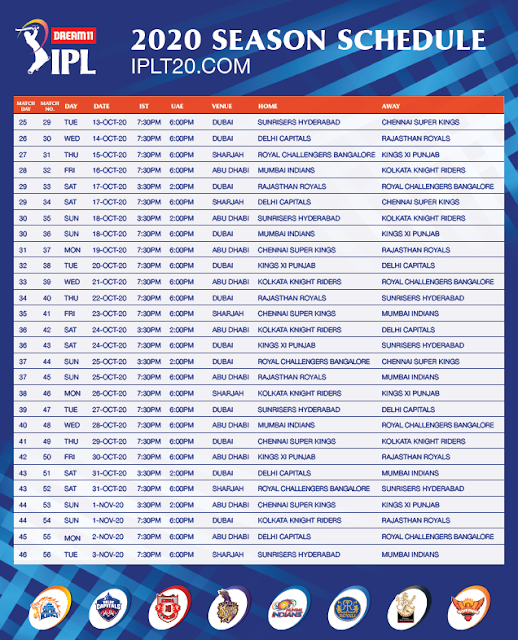