How to Order for Aadhaar PVC Card

How to Order for Aadhaar PVC Card 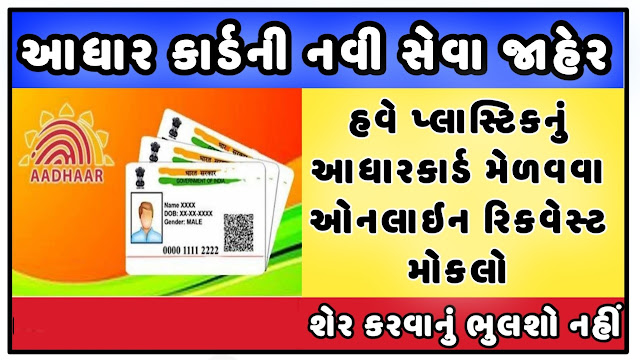 How to Order for Aadhaar PVC Card UIDAI (Unique Identification Authority of India) has recently introduced the release of PVC based Aadhaar card. This card is easy to carry and is durable. It will have a digitally signed secure QR code with photographs and demographic details equipped with many security features. UIDAI says that even if your mobile number is not registered with the Aadhaar card, you can order this card.

The government, to address this problem, has launched PVC Aadhaar Cards. PVC stands for Polyvinyl Card, which looks similar to the size of an ATM Card. One can carry the PVC Aadhar card in their wallet easily because of its smaller size. Moreover, the citizens can avail of these portable sized Aadhar Cards registering on the official portal residentpvc.uidai portal.
Features of the Aadhaar PVC Card
What are the charges for applying for the Aadhaar PVC Card?
Individual will have to pay a nominal fee of Rs 50 (inclusive of GST and speed post charges) while ordering the Aadhaar PVC Card
How to Request for Aadhaar PVC Card at residentpvc.uidai.gov.in
Can I choose to have and use any form of Aadhaar?
Yes. The residents can choose to have one or more forms of Aadhaar. The residents may also choose to use any form of Aadhaar as per their convenience. All forms of Aadhaar are equally valid as a proof of identity without giving any preference to one form of Aadhaar over the others.
What is “Order Aadhaar Card” service?
“Order Aadhaar Card” is a new service launched by UIDAI which facilitates the Aadhaar holder to get their Aadhaar details printed on PVC card by paying nominal charges. Residents who do not have registered mobile number can also order using Non-Registered /Alternate Mobile Number.
What are the security features of “Aadhaar PVC Card”?
This card contains security features like:
What are the charges to be paid for “Aadhaar Card”?
Charges to be paid are Rs.50/- (Inclusive of GST & speed post charges).
Aadhaar PVC Card FAQ:
What are the different forms of Aadhaar and what are their features?
The Unique Identification Authority of India (UIDAI) has introduced various forms of Aadhaar from time to time for the convenience of residents:
Aadhaar Letter: Paper-based laminated letter with secure QR Code with Issue Date and Print Date. Aadhaar letter is sent to resident free of cost by ordinary post in case of new enrolment or mandatory biometric update. If the Aadhaar letter is lost or destroyed, the resident can order a reprint online at a cost of Rs. 50/- from UIDAI’s official website. Reprinted Aadhaar letter is delivered to the resident by speed post.
eAadhaar: eAadhaar is the electronic form of Aadhaar, digitally signed by UIDAI, having QR code for offline verification with Issue Date and Download Date. Resident can easily download eAadhaar/masked eAadhaar from UIDAI’s official website using registered mobile number. The masked eAadhaar displays only last 4 digits of Aadhaar number. eAadhaar is generated automatically with every Aadhaar enrolment or update and it can be downloaded free of cost.
mAadhaar: mAadhaar is digital form of Aadhaar which can be installed on mobile device. mAadhaar app is available on Google play store/iOS for downloading on resident’s mobile device. It has QR code for offline verification. Like eAadhaar, mAadhaar is also generated automatically with every Aadhaar enrolment or update and it can be downloaded free of cost.
Aadhaar PVC Card: Aadhaar PVC Card is the latest form of Aadhaar introduced by UIDAI. Other than being easy to carry and durable, the PVC-based Aadhaar Card has a digitally signed secure QR code with photograph and demographic details with multiple security features. It can be ordered online through uidai.gov.in or resident.uidai.gov.in using Aadhaar number, Virtual ID or Enrolment ID and paying a nominal charge of Rs. 50/-. Aadhaar PVC Card is delivered to the resident’s address by speed post